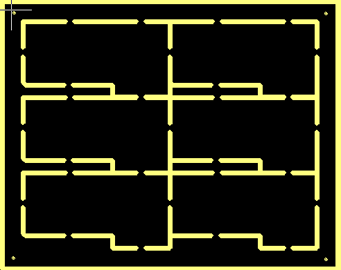 The purpose of panelization is to secure PCB boards during manufacturing, shipping and assembly processes and faster throughput while making their separation as painless as possible.

PCBA Manufacturer = The company that manufactures an assembled or populated PCB for you, also known as CMs or contract manufacturers.

A "PCB Shop Fabrication Panel" is not the same as a "Customer PCB Panel", yet both are known as "Panels" in their respective industries.

The "PCB Shop Fabrication Panel", is the panel that a PCB manufacturer like OMNI uses to fabricate your boards and panels, it usually contains several "customer PCB panels" and/or it may contain "loose" customer PCBs, also referred to as "single pcbs".

A "Customer PCB Panel", or simply a "PCB Panel" is the panel that is utilized by a Contract Manufacturer (CM) for PCB assembly, meaning, populating a PCB with SMD or PTH components and thus creating a "PCBA" ("A" stands for Assembly).

Panelization can be as simple as a rectangular board tab routed with a 100mil (0.100”) space between PCB boards and a 500mil (0.50”) border on four edges. Or, it can be as complex as a panel filled with combination of Jump V-score or routed rounded polygons.

Some guidelines for panelization are simple, for example, with routed panels:

As with all technical subjects, exceptions abound. For example:

It’s important to ensure the clearance between any metal and the edge of the PCB board is a minimum of 5mil for routing and 20mil for v-scoring.

Having the metal exposed during routing or v-scoring could lead to shorts after assembly and jagged edges.

The size and shape of the board will determine how many breakout tabs to use. Too few and the PCB may not be mechanically stable enough for assembly. Too many and the de-panelization process becomes onerous.

It is not uncommon to order a pair of boards (different designs) as a single set (customer panel PCB). So panelizing them together makes sense. This is possible with some restrictions:

When panelizing for production quantities, we are often requested to provide panelization or paste files. These outputs from the CAM process enable our customers to purchase their solder paste stencils.

As manufacturers, we are faced with constant panelizing challenges.

Consider a customer who historically purchases 32 boards per order which are produced on 8 boards per panel, increasing their order quantity to 500 boards. The choice has to be made whether to produce the boards on the original panel and suffer the material waste due to poor utilization or re-panelize and produce all new tooling configurations and larger panel sizes which could in turn create warping problems while populating the PCBs.

One answer to ever changing order quantities is to adopt lean-manufacturing processes. By combining like designs on the same panels, we have been able to increase the utilization by as much as 50% and have also resulted in lead-time reductions of 20% which translates to lower price quotes.

More planning and work is required on the front end but the impact to materials and PCB manufacturing is substantial. Streamlining processes not only impacts the cost, it also helps ensure a short production window.